I finally finished "Castle Rock" and I really enjoyed it!  Right off the bat, I was looking forward to getting into it, because I do really like "Misery" and the character of Annie Wilkes.  I was intrigued by a younger version of her and see what made her so wacky.  The beginning of the season was great, and then unfortunately, it took a turn, not for the worse.  But, for the boring.  I did lose it a bit in the middle of the season.  Episodes 4 - 6, specifically.  My malaise didn't help when we were thrown a B plot involving the already dead Ace Merrill, who I never liked as a character and was kind of happy when Annie killed him.  But, of course, he stuck around throughout the course of the season via rising from the dead.

Apparently, 400 years prior, in Jerusalem's Lot, the neighboring town of Castle Rock, there was a cult that followed a young girl who was cast out by her father for not following the proper god or whatever, and when she saw an "angel", she was imbued by the ability to grow crops on the people's previously infertile lands, and the townspeople thought she was their new god and started worshipping her.  Her lover and about 40 other people were like her disciples, and would do anything she asked in the name of the angel.  When she told them that they'd all have to sacrifice themselves and be buried in this particular spot, but they would be resurrected on the 400th anniversary of the town, they agreed.  Her lover was the last to kill himself after he killed and buried her.  There was some weird thing where they all had to swallow some beetly-type bug first, I guess to hold on to their souls, and then their throats were slit.

Fast forward 400 years later, and the two towns are planning a huge festival to celebrate.  Ace was resurrected first, because Annie unknowingly buried him at a construction site, which was actually the burial site of the cult from 400 years ago.  He absorbed the soul of the young woman's lover, and began killing people in town and burying THEM in order to resurrect his friends and Amity's followers.  The collective worked on the Marsden house in order to prepare it for Amity and the resurrection.  Through a bunch of conversations amongst people that you wouldn't normally think would talk, Pop finds out that Ace is dead and involved with this collective.

On the day of the festival, there is this huge town parade and the walking dead people find the statue of their angel and uncover it, possessing the entire town to follow them. THIS is when we find out, after alluding to the idea by seeing scenes of the cage below Shawshank and letters between the old warden and Sherriff Pangborn (that ended up in Pop's care), that the angel is Bill Skaarsgard's character from season 1 - the devil, immortal, whatever he was.  I LOVED that whole connection!  One of Pop's other nephews, who is dating Nadia, his adopted daughter, was a walking dead as well, but was able to flip out of it by Nadia administering Haldal to him.  This is when she discovered that she can help this situation out with science.  Thank goodness someone has sense!  Nadia, her brother, Abdi, Pop, Annie, and Chance band together to fight the walking dead cult collective, especially after Joy became possessed and we find out that they think SHE is the vessel that they want to use for Amity. Thanks to Nadia's discovery about the Haldal, Pop, dying of cancer and also in a standoff with Ace, administers some to himself and then lets Ace kill him.  He knows that Ace will try to resurrect him (because of his useful information from the letters), but he would be able to buy him and the others some time.  Which he does, and, when he knows that his kids are clear, and that Joy was cleared from the area, he blows himself up, taking down the entire Marsden house and the rest of the collective with him.  Crying!!!!  Also, this was the final nail in the coffin for me, proving that Tim Robbins should be in every Stephen King adaptation ever.

My other issues:  Why didn't you let me have a lesbian happy ending with Joy and Chance?  How did Annie get away?  I can't believe she killed her!  Oh, my god, her poor father!  I know he cheated on her mother, but he was legitimately trying to help Annie learn to read and write, not make excuses for her like her mother did, and he wasn't obsessed with cleanliness and godliness like her mother was.  If Mrs. Wilkes hadn't imbued such a stark line between good and bad in Annie growing up, Annie wouldn't have become so jealous and killed her father and attempted to kill Rita.  Also, WHY couldn't Joy end up escaping with Rita???  I know I felt bad for Annie as she grew up, but when she became an adult and basically started abusing Joy, I was all #teamJoy throughout the rest of the season.

That is it for now!  I hope you enjoyed my review/rant!  This was a long one for today, but I will catch up again with you soon! 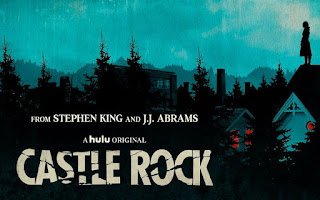